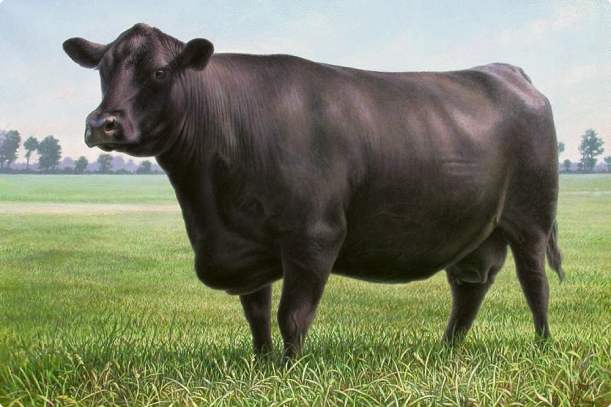 Aberdeen-Angus is an old breed of cows bred in the Scottish counties of Aberdeen and Angus in the XVII century.  First, the breed was used for plowing the land.  The meat was not eaten, as it was stiff and sinewy.  At the end of the 19th century, Anguses were brought to the US state of Kansas, where they were ennobled.  An early role was played by the precocity of animals of this suit. Angus began to be sold for export In the XX century. So they ended up in Australia, New Zealand, Canada and Argentina. In our country, Russia, Aberdeen-Angus bulls appeared in the 50s of the last century

Description of the breed

Aberdeen-Angus bull can be recognized among others by such signs as hornless and black coloring. The animals are compact in size - at the withers, Angus rarely reach more than 118 cm. When crossed with other breeds, calves transmitted characteristic features are hackney and black coat.  Aberdeen Anguses differ:

Angus is characterized by a rapid growth.  Quickly reaching maximum growth, they stop growing and begin to gain weight.  They are tend to obesity.  Aberdeen Angus is a meat breed.  Milk symptoms are poorly developed

A newly born calf weighs only 22-28 kg, depending on gender.  Calves grow by leaps and bounds - by the age of six months they reach a mass of 180 kg.  An animal can gain 1 kg of weight or more.  Adults weigh: cows - up to 550 kg, and gobies - up to 950 kg.  The weight of an adult bull for fattening can reach 1 ton. Anguses are characterized by a thin and light skeleton.  Thanks to this, you can get 70% slaughter yield.  Meat is a marbled   fine fiber beef, with uniformly fatty layers, tender, aromatic and great in taste.

The breed has many advantages:

When crossing Angus with other breeds, you can get valuable offspring